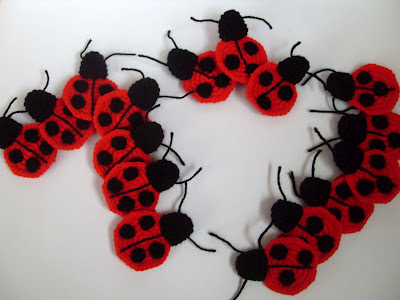 Dots
With black yarn, make a Magic Circle
Knot and secure the magic circle.
Round 1: Work 6 SC through the loop. SL ST to join. (6 SC Total)
(make 3 or 4 dots for each bug)

Finishing
Align and sew the head to the body. Knot, secure and sew in the tails.
Sew dots on the body and don’t forget to sew a strand of yarn in midline

A story to remember

I feel like sharing a story, a true story.
Some of you might know that 'Amani' is not my real name. In fact, none of my family members ever called me 'Amani' before.

So, who is actually 'Amani'?
There's a story behind...a very sad story indeed...

Back in 2010, there was a kitten in our backyard, trying hard to push the sliding door open, to enter our house. He was so small, black in colour, with few stripes on his body. We knew that he was hungry, hence, we gave him some food, which he finished within seconds. He was very hungry, obviously.

We were entertained by his adorable gestures. He came to our feet and lay down his body, spontaneously. Instantly, we felt in love with 'Amani'. We named him after a cute girl in a drama series 'Adamaya' which was popular that time.

Amani was so lovely. We placed him in a box in front of the main door outside of our house. He would always try to get into our house everytime he heard someone is opening the door. Sometimes, we would make fake door sounds and watched him from inside. Amani would run as fast as he could to reach the front door, and waited for the door to open. When there seem no one's coming out, he would go away. After he moved a few steps, we would make the fake sound again, and we would laugh heavily when he jumped and run to the door again.

1 lesson I learnt from Amani; never give up!


I was new to crochet that time. One of the project lingered in my mind was...'a cat collar for Amani...' 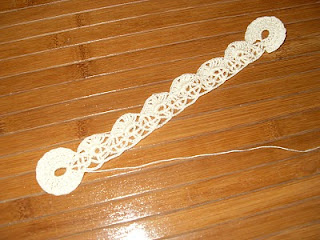 With little knowledge on crochet, I made a cat collar for Amani, using a very small crochet thread and a very fine crochet hook. I was so enthusiast to finish the cat collar.

I could still remember, that afternoon, my sister brought Amani inside and played with him. Amani came to me, but I ignored him beacause I was so determined to finish crocheting the cat collar. Finally, I managed to finish the collar in the evening. Too excited, I immediately opened the front door and called him out loud. I wanted to put to put the collar on him. However, after so many calls, Amani showed no sign that he was nearby our house. I called him again and again and again....

Amani went missing, the fact that was hardly accepted by all of us. We can't help but to hope for him to come back, but at certain point, we know that he will never be with us again.


That's the end of the story.
Thank you

Email ThisBlogThis!Share to TwitterShare to FacebookShare to Pinterest
Labels: Amani 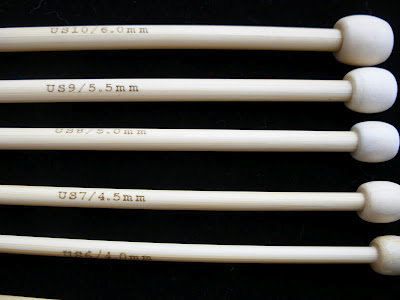 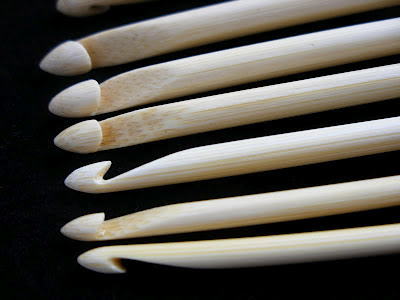 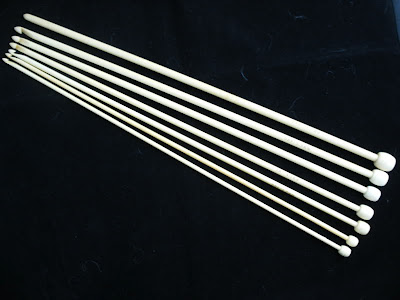 To purchase, please email to amaniekd[at]yahoo[dot]com and kindly provide me with your details (NAME, ADDRESS, PHONE NUMBER). TQ

This hand-held knitting wonder is one handy little gadget!
It knits yarn, embroidery floss, and even wire.

This hand knitter tool makes 0.5" and 1" width knitted rope.
Create: accessories for purses, scarves, sweaters, and more: create jewelry, toys, and with some imagination, the possibilities are endless! 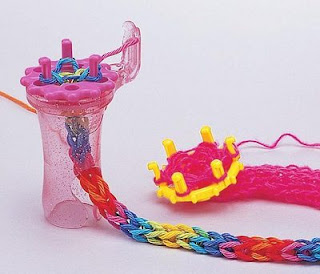 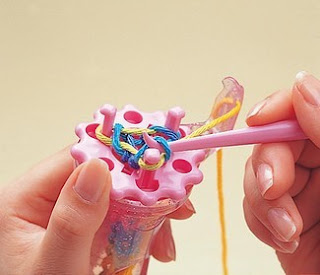 Package contains: 2 rotating disks, hook, Wonder Knitter base, and instructions. This is such an easy way to knit even a child could master it!

Made of ABS resin and polyacetal.
Colors: pink, yellow, and transparent plastic with glitter base with a green hook. 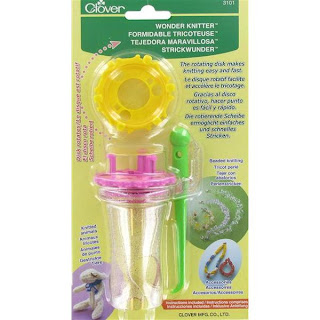 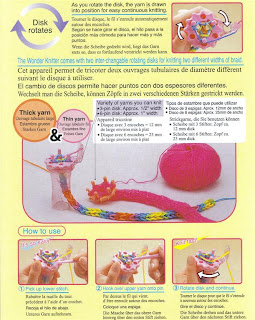 
Comes with a 3 and 6 pin removable head
Great for beadwork jewelry, scarfs, etc. 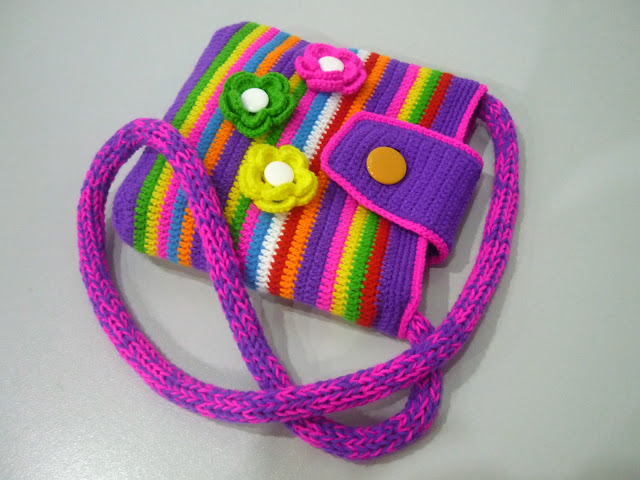 To purchase, please email to amaniekd[at]yahoo[dot]com and kindly provide me with your details (NAME, ADDRESS, PHONE NUMBER). TQ

These are the bags (and beanie) that kept me busy this past 2 weeks. Real busy.
Alhamdulillah, everything is now finished and I can go back to campus with ease.

Let's have a look one by one

This plus size bag is for my dear sister. She designed the bag herself. This is actually my WIP which have been started about a year ago. Thank God it's finished now

The evergreen ripple bag.
My sister asked, 'why don't you create a new bag with new design?'
she was getting bored with this design due to the fact that I've made loads of them since this past 2 years.
I could only reply, ' I won't stop making this bag because the demand is high!'

I love this pink bag so much. However, this picture didn't do justice to the real bag, the actual one is way more beautiful than this. I'm secretly hoping that the bag owner doesn't want it so that I can own this bag! (it's not a secret anymore:-)

'whoaa...why so cute??', asked my sister, referring to the sling bag above
This small sling bag is very very very cute. The bag is lined with cotton fabric with 2 zipper pockets inside. For the shoulder strap, I use Clover Wonder Knitter (available to purchase). It creates a sturdy knit-like strap with hole in the middle. Cuteness overload!

This is an african flower bag with 26 hexagon motifs. I've written down the tutorial in here

This zigzag tote bag is inspired by Sarawak vase. My mum loves Sarawak vase so much, so I made this bag for her. It has an ethnic element in it, would you agree with me? 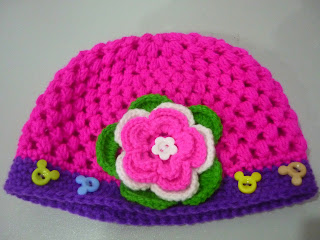 last but not least...a baby beanie.

Thanks for reading~
Happy crafting
Posted by amani at 2:30 PM 8 comments: 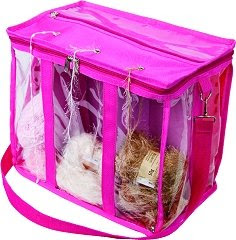 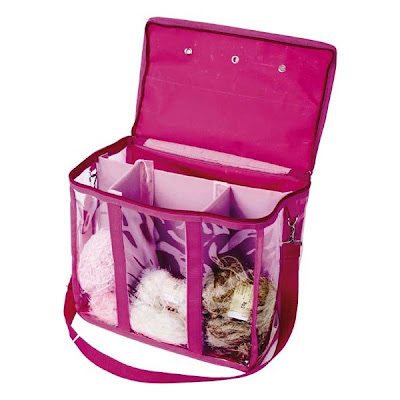 Keep your yarn and accessories alll in one place with The knitting Caddy. A stylish way to store and organize yarn supplies, it's ideal for knitting, crocheting, and other needlecrafts. Tote has tons of storage, including 3 large pockets with 3 holes

Now it's easy to take your projects wherever you go! No more tangled yarn or misplaced needles 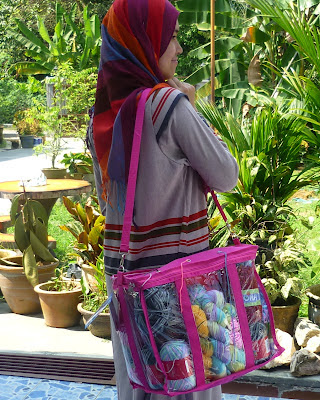 Storage in style
The perfect companion for all crafters 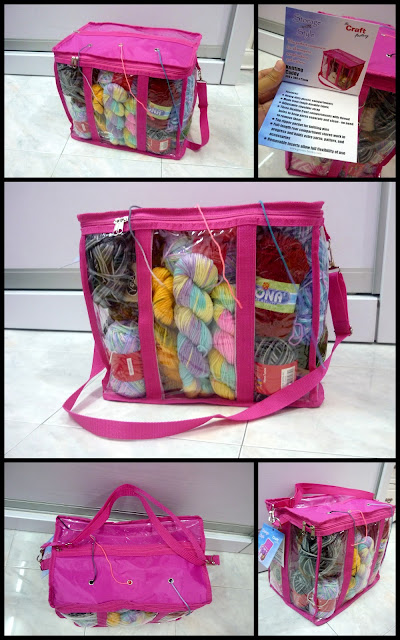 To order, please email to amaniekd[at]yahoo[dot]com

Hurry, grab one while stock last

Dear readers,
orders for customised crocheted items are closed until August 2013. Any inquiries, please email to amaniekd[at]yahoo[dot]com
Please visit my online store, Fun Crochet Tools for various selection of crochet tools needed for your crochet/crafting project~
We will reply to all orders within 24 hours. If you do not receive any emails from us, please check your spam box. 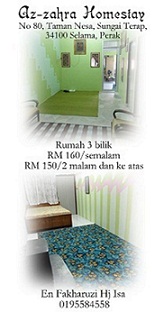 this is the normal size of my tote bag~!! 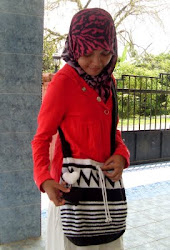 This is the normal size of my sling bag